This site is intended for US residents only

What would less frequent injections mean to your patients?

When stiffness returns too early, the struggle resumes... Use Dysport for symptom* relief that lasts between injections.
*Symptoms of spasticity can include abnormal increase in muscle tone and muscle spasm.

When efficacy wears off, even something as simple as getting out of the car can become a challenge again. 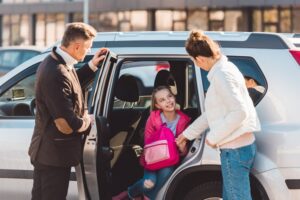 Annika talking about lower limb spasticity: “Your muscles get tight, your hips pop. It makes it harder to run … Getting in and out of the car can be difficult. It makes running and playing harder, it slows me down.”
Annika’s experience between injections of Dysport: “[After treatment] she starts walking better, as in tripping less. Then slowly she starts tightening up again and luckily it’s time to go back in before it gets unmanageable. [Injection works for] about 3-4 months.” Wendi

A History of FDA Approval

Dysport has been available for 10+ years in the US and it has been FDA approved for the treatment of AULS since 2015 and for ALLS since 2017.

Dysport has an established efficacy in reducing muscle tone in pediatric patients with upper limb spasticity at week 6, and improvement could last beyond the minimum retreatment period1

In the treatment of pediatric patients (aged 2 years and older) with spasticity, start Dysport for lasting symptom relief1

The majority of patients in the clinical study were retreated between 16 and 28 weeks; however, some had a longer duration of response1,2
Dysport is FDA approved for the treatment of spasticity in children aged 2 years and older

Patients were randomized to receive Dysport 2 Units/kg (n=70), 8 Units/kg (n=70), or 16 Units/kg (n=70) for the first treatment cycle. The completion of 1 cycle occurred when the patient received their next injection. Patients were assessed for retreatment eligibility at week 16. If ineligible for retreatment, they were evaluated every 6 weeks (plus or minus 2 weeks) until eligible. There had to be a minimum of 16 weeks between each injection session, and patients could receive a maximum of 4 sessions over the course of the study. After completing their first treatment cycle, patients receiving Dysport 2 Units/kg were rerandomized to receive Dysport 8 Units/kg or 16 Units/kg. Patients receiving the higher doses remained at their dose unless an adjustment up (not exceeding 16 Units/kg) or down was mandated by the investigator. The study remained double blind for the remaining 3 cycles, or until patients exited the study at 1 year and 9 months. 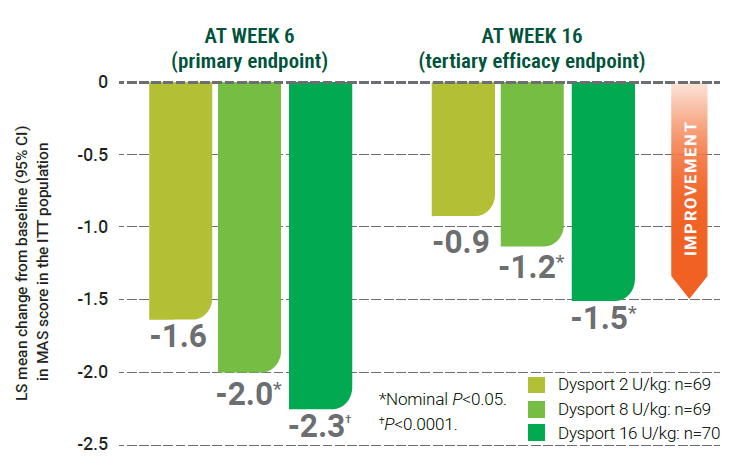 Although week 16 analysis was prespecified, being a tertiary endpoint, appropriate multiplicity adjustments were not applied; therefore, the results need cautious interpretation and could represent chance findings.

At week 6, patients receiving 16 Units/kg demonstrated a 35% greater reduction in muscle tone than those receiving 2 Units/kg

The effect of Dysport lasted beyond the minimum 16-week retreatment period in some pediatric patients; a majority of patients did not need retreatment until week 22 and effects lasted even after week 34 in some patients.2,*

Time to retreatment was not a primary endpoint. Retreatment for upper limb spasticity should occur no sooner than 16 weeks after the first injection1

Out of the patients receiving Dysport 8 Units/kg, 15.8% were retreated between weeks 34 and 52. Of that number, 3 patients were withdrawn, while 6 did not need a reinjection, or data were missing2

Out of the patients receiving Dysport 16 Units/kg, 20% were retreated between weeks 34 and 52. Of that number, 3 patients were withdrawn, while 7 did not need a reinjection, or data were missing2

The optimal dose of Dysport, muscles to be injected, and retreatment eligibility should be selected based on the patient’s progress and response to treatment1,2

*Patients who remained in the upper limb study after week 16 were permitted additional discretionary follow-up visits at week 22, week 28, week 34, or beyond3

Dysport has an established efficacy in reducing muscle tone in pediatric patients with lower limb spasticity at week 4, and improvement could last beyond the minimum retreatment period1

In the treatment of pediatric patients (aged ≥2 years) with spasticity, start Dysport for lasting symptom relief1
The majority of patients in the clinical study were retreated between 16 and 22 weeks; however, some had a longer duration of treatment
Dysport is FDA approved for the treatment of spasticity in children aged 2 years and older

Time to retreatment was not the primary endpoint

PGA and MAS were assessed by separate investigators2

*The MAS is an updated version of the Ashworth Scale used to measure muscle tone and includes an additional scoring component to measure resistance during movement.6

**The PGA is a global assessment of a physician’s impression of a patient’s response to treatment.2

*The ITT population (N=235) included all randomized subjects who received at least one injection of study treatment and who had a MAS score in the gastroc-soleus muscle complex assessed both at baseline and at week 4.

Pediatric patients who remained in the study after week 12 were permitted additional discretionary follow-up visits at week 16, week 22, and week 28 to assess eligibility for retreatment6 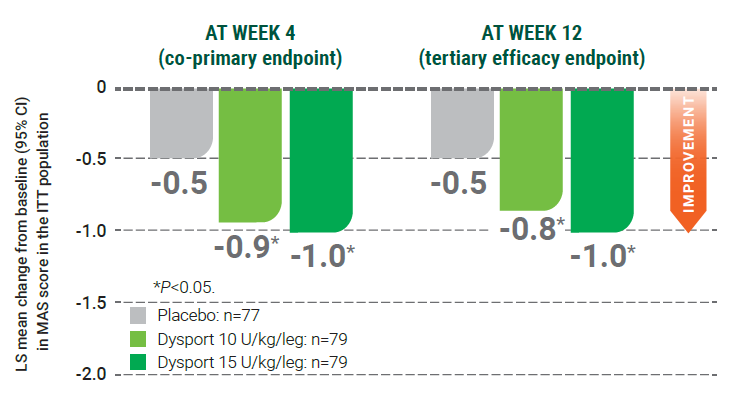 The most frequently reported adverse reactions (≥10%) were nasopharyngitis, cough, and pyrexia

The effect of Dysport lasted beyond the minimum 12-week retreatment period; most pediatric patients did not need retreatment until week 16 and effects lasted even after week 28 in some patients.1,2,*

Time to retreatment was not a primary endpoint. Repeat Dysport treatment should be administered no sooner than 12 weeks after the previous injection1

*Pediatric patients who remained in the study after week 12 were permitted additional discretionary follow-up visits at week 16, week 22, and week 28 to assess eligibility for retreatment.6

‡4.4% of pediatric patients were retreated after week 28.2

Interested in adding your practice to our Dysport Doctor Locator directory or updating your listing?

Register for Doctor Locator when you sign up for C.L.I.M.B.®

Postmarketing reports indicate that the effects of Dysport and all botulinum toxin products may spread from the area of injection to produce symptoms consistent with botulinum toxin effects. These may include asthenia, generalized muscle weakness, diplopia, blurred vision, ptosis, dysphagia, dysphonia, dysarthria, urinary incontinence, and breathing difficulties. These symptoms have been reported hours to weeks after injection. Swallowing and breathing difficulties can be life threatening and there have been reports of death. The risk of symptoms is probably greatest in children treated for spasticity, but symptoms can also occur in adults treated for spasticity and other conditions, particularly in those patients who have underlying conditions that would predispose them to these symptoms. In unapproved uses and in approved indications, cases of spread of effect have been reported at doses comparable to or lower than the maximum recommended total dose.

Dysport is contraindicated in patients with known hypersensitivity to any botulinum toxin products, cow’s milk protein, components in the formulation or infection at the injection site(s). Serious hypersensitivity reactions including anaphylaxis, serum sickness, urticaria, soft tissue edema, and dyspnea have been reported. If such a reaction occurs, discontinue Dysport and institute appropriate medical therapy immediately.

The potency Units of Dysport are specific to the preparation and assay method utilized. They are not interchangeable with other preparations of botulinum toxin products, and, therefore, units of biological activity of Dysport cannot be compared to or converted into units of any other botulinum toxin products assessed with any other specific assay method.

Treatment with Dysport and other botulinum toxin products can result in swallowing or breathing difficulties. Patients with pre-existing swallowing or breathing difficulties may be more susceptible to these complications. In most cases, this is a consequence of weakening of muscles in the area of injection that are involved in breathing or swallowing. When distant side effects occur, additional respiratory muscles may be involved. Deaths as a complication of severe dysphagia have been reported after treatment with botulinum toxin. Dysphagia may persist for several weeks, and require use of a feeding tube to maintain adequate nutrition and hydration. Aspiration may result from severe dysphagia and is a particular risk when treating patients in whom swallowing or respiratory function is already compromised. Patients treated with botulinum toxin may require immediate medical attention should they develop problems with swallowing, speech, or respiratory disorders. These reactions can occur within hours to weeks after injection with botulinum toxin.

Individuals with peripheral motor neuropathic diseases, amyotrophic lateral sclerosis, or neuromuscular junction disorders (e.g., myasthenia gravis or Lambert-Eaton syndrome) should be monitored particularly closely when given botulinum toxin. Patients with neuromuscular disorders may be at increased risk of clinically significant effects including severe dysphagia and respiratory compromise from typical doses of Dysport.

This product contains albumin, a derivative of human blood. Based on effective donor screening and product manufacturing processes, it carries an extremely remote risk for transmission of viral diseases and variant Creutzfeldt-Jakob disease (vCJD). There is a theoretical risk for transmission of Creutzfeldt-Jakob disease (CJD), but if that risk actually exists, the risk of transmission would also be considered extremely remote. No cases of transmission of viral diseases, CJD, or vCJD have ever been identified for licensed albumin or albumin contained in other licensed products.

The possibility of an immune reaction when injected intradermally is unknown. The safety of Dysport for the treatment of hyperhidrosis has not been established. Dysport is approved only for intramuscular injection.

There are no adequate and well-controlled studies in pregnant women. Dysport should be used during pregnancy only if the potential benefit justifies the potential risk to the fetus. Based on animal data, Dysport may cause fetal harm.

The safety and effectiveness of Dysport injected into proximal muscles of the lower limb for the treatment of spasticity in pediatric patients has not been established. Based on animal data Dysport may cause atrophy of injected and adjacent muscles; decreased bone growth, length, and mineral content; delayed sexual maturation; and decreased fertility.

In general, elderly patients should be observed to evaluate their tolerability of Dysport, due to the greater frequency of concomitant disease and other drug therapy. Subjects aged 65 years and over who were treated with Dysport for lower limb spasticity reported a greater percentage of fall and asthenia as compared to those younger (10% vs. 6% and 4% vs. 2%, respectively).

Dysport® (abobotulinumtoxinA) for injection is indicated for the treatment of:

You are about to leave DysportHCP.com. This link is provided as a service to our website visitors. It will take you to another website maintained by Ipsen Biopharmaceuticals Inc.

You are about to leave DysportHCP.com. This link is provided as a service to our website visitors. It will take you to a website maintained by a third party who is solely responsible for its content.

Ipsen does not control, recommend, endorse or accept liability for sites controlled by third parties.